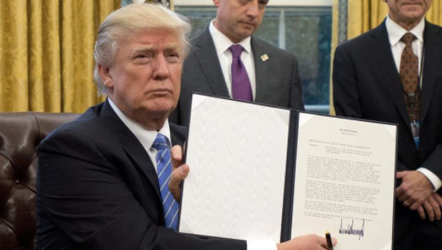 On 23rd January 2017 Donald Trump signed an executive order to withdraw the US from the Trans-Pacific Partnership. It is an an act to fulfill the campaign promise, but a grave mistake. It will adversely affect American economy in the immediate future. And it will greatly hurt American economy in the long run. America will, from now on, go it alone with an uncertain future while the rest of the world continues to prosper in the present globalized world of free trade. American economy will just have to make do with what they have.
It will not be a pretty sight!
The Trans-Pacific Partnership (TPP) is still not in force because it is an agreement signed but yet to be fully ratified. It needs ratification by all 12 signatory countries’ parliaments, including the US Congress.

TPP’s 10,776 page-long documents (Yes, I counted it myself! So can you. See http://www.international.gc.ca/trade-agreements-accords-commerciaux/agr-acc/tpp-ptp/text-texte/toc-tdm.aspx?lang=eng) must be read and scrutinized by senators and congressmen during the Trump administration.

For a brief history of US free trade deals, voters should read "Broken Promise", a paper written by Elizabeth Warren and her staff (http://www.warren.senate.gov/files/documents/BrokenPromises.pdf). In simple format, it clearly explains the failures of previous US governments, Democratic and Republican, in dealing with various free trade agreements, from the North American Free Trade Agreement to the Trans-Pacific Partnership.

The Trans-Pacific Partnership itself still needs ratifications by member countries for it to enter into force. It is not up to the President of the United States himself alone to make or break the commitment. It needs congressional approval, whenever that may be. It is up to the two political parties to fight for the majority in both houses so that they can control the outcome of the congressional votes for or against the TPP.

Renegotiation for the TPP is, in principle, not possible because the US has already signed it. Not only that, the US has been the leading proponent of the TPP all along. It will be very embarrassing, indeed, if the US suddenly found a reason to reject its own idea.

For TPP to enter into force, it must be ratified by at least 6 signatories by 4 February, 2018. And those 6 signatories together must have a GDP of more than 85% of the GDP of all 12 signatories.

Under Article 30.6 of the TPP Agreement, to withdraw from the TPP the US only needs to send written notice of withdrawal to the Depository and simultaneously notify other Parties of its withdrawal through the contact points. The withdrawal shall take effect within six months unless the Parties to the TPP agree on a different period. Following the completion of the process of US withdrawal, presumably in June or July 2017, the TPP Agreement will remain enforce for the remaining 11 Parties.

TPP is good for America. President Barack Obama knows it. Secretary John Kerry knows it.  Justin Trudeau knows it. And I know it. Anyone who can read knows it. Sadly, Donald Trump doesn't read.

On 23rd January 2017 Donald Trump signed an executive order to withdraw the US fro the TPP.

Mr.Donald Trump chose a simple way out by just say “no”. It’s easy for him to say no to something he thought would please his voters and he himself does not care to learn.

​America will from now on go it alone with an uncertain future while the rest of the world continues to prosper in the present globalized world of free trade.
​
At least for the next four years of Trump's administration the world can ignore trade partnership with the US.
American economy will just have to make do with what they have.

It will not be a pretty sight!